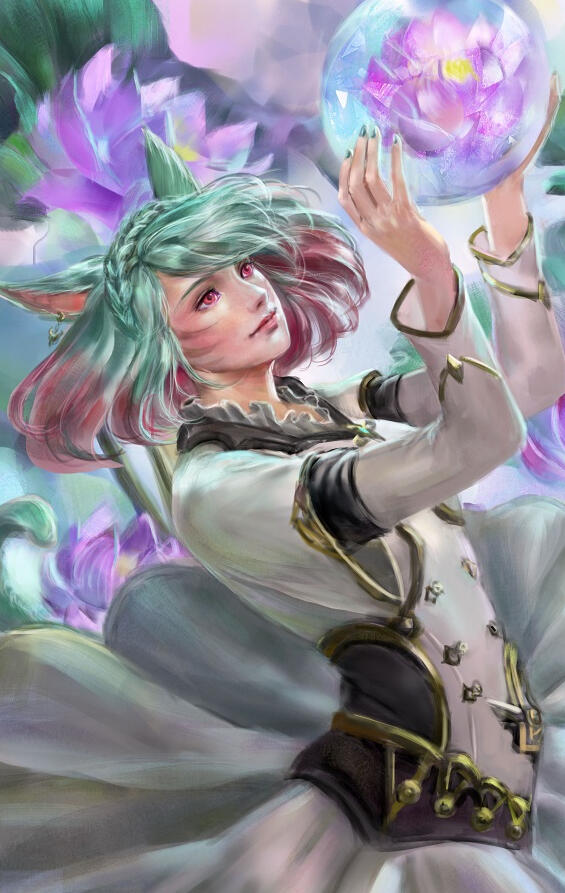 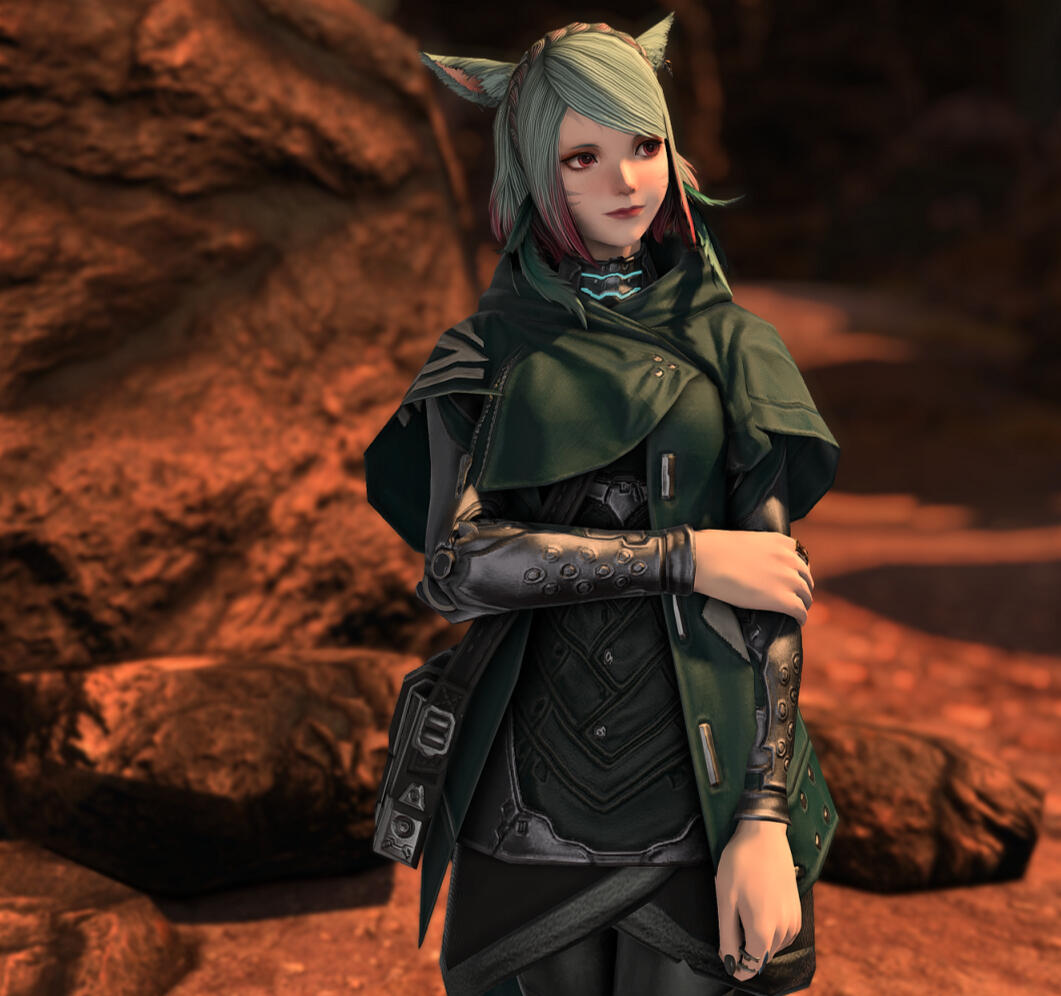 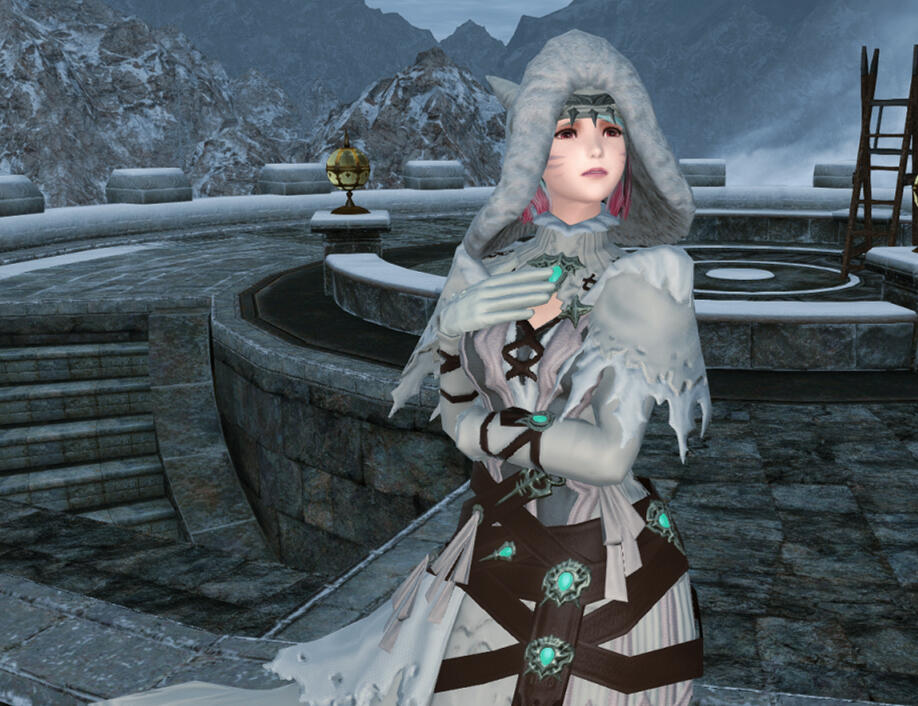 "No one dared to move against the Jhakrohs…mostly because many failed to recognize that they even existed, but all the same. It was a world that justice’s light could not reach, and only people like her could tread there."

Framboise hails from the Jhakroh clan, a peculiarly large family of powerful black market string-pullers. She does her best to distance herself as far from that association as possible. She's often regarded by her kin as the "black sheep" of the family, favoring nurturing and communal pursuits rather than indulging the cut-throat nature of her heritage.

When presented with the opportunity to leave home to study the art of conjury, she was packed and on the road by morning. She continues to look for opportunities to learn new healing methods, help those around her, and basically find any reason not to return home.

Her unsavory background has a way of catching up to her. She has a proclivity to go into hiding when trouble reaches a fever pitch. Once the dust settles, however, she continues her quest for advanced healing magicks, careful to avoid the public eye. 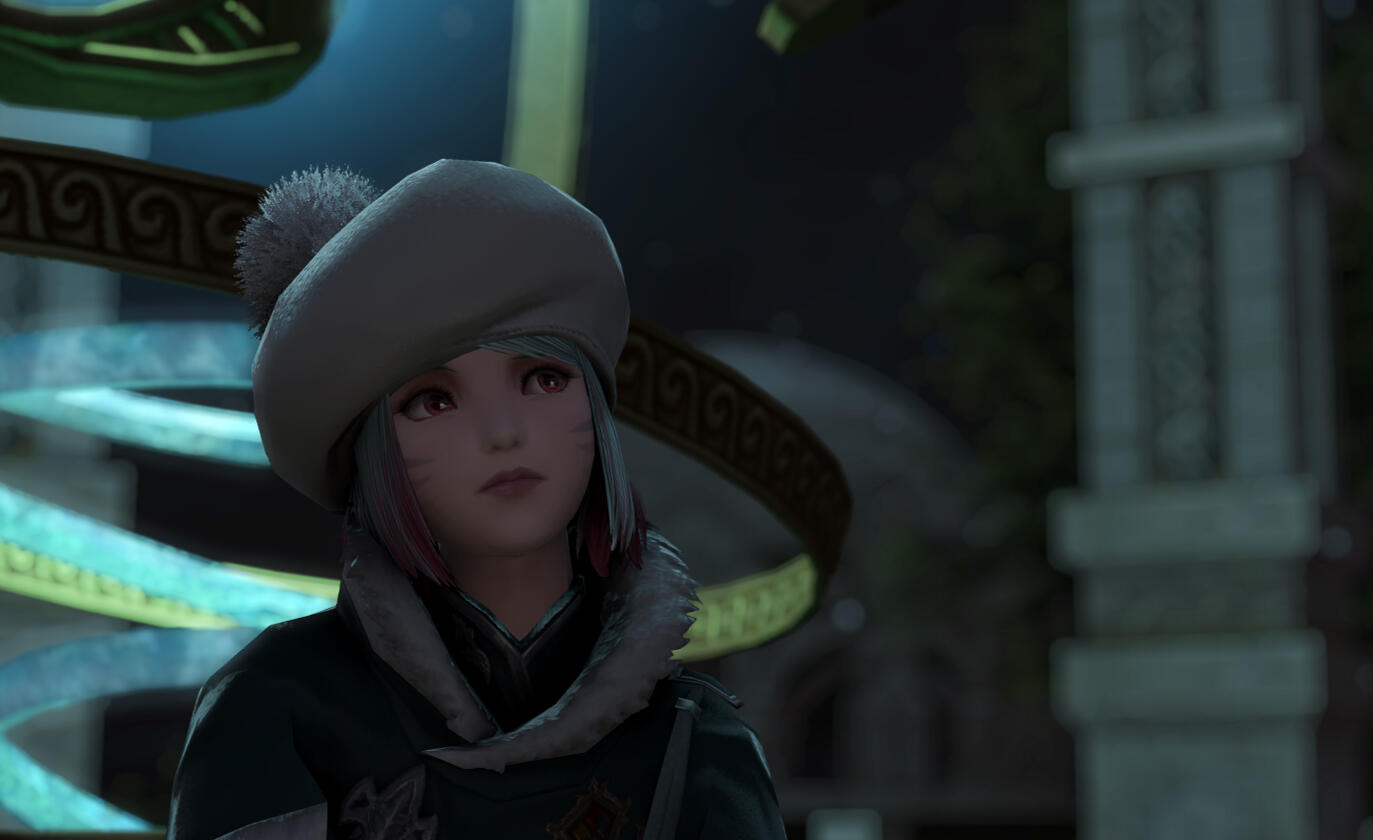 Herbalist: Fram is often found in abandoned, overgrown and secluded areas, gathering and toying with whatever assortment of flora the landscape has to offer her. [Deeper Still: She seems to hold communion with plants much in the way one would see people interact with companion animals, such as a pet dog or cats.]

Spiritbonds and Attunement: Framboise has taken a recent interest in the phenomenon of spirit-bonding and attunement. It seems to be a field of study that has very little documented information. She aims to either find what there is to find on its nature and consequences - or be a trailblazer in that realm of study.

Black Market: Although Fram is eager to cut all ties to her family background, there are some things about the criminal life that are woven into the fibre of her being. Perhaps your character has less-than-savory habits and you can smell depravity a milm away. Or maybe you're from a merchant guild or family and the Jhakroh family has done you dirty...

A Wealthy Benefactor: Though never truly poor, Framboise has in recent years become a woman of means. By no means conspicuous in her consumption, she is on the eye out for a few good men or women to bring into her own employ - for personal pursuits or for the betterment of her associates.

The Throes of Combat: Odds are, you're an adventurer, right? Adventurers get hurt. Maybe you find yourself in a tight spot in need of assistance. Maybe you narrowly escaped a run-in with your own sordid backstory. Or MAYBE you're the dashing hero who comes to Fram's rescue! ...because in case you didn't know...combat isn't really her bag . (Frankly, she kinda sucks at it.)

Studious: Framboise has lived a sheltered existence, and as such her adulthood is defined by her persistent thirst for knowledge as it pertains to the aetheric disciplines. Does your character have a specialty to share, or are they called towards a mentorship role? 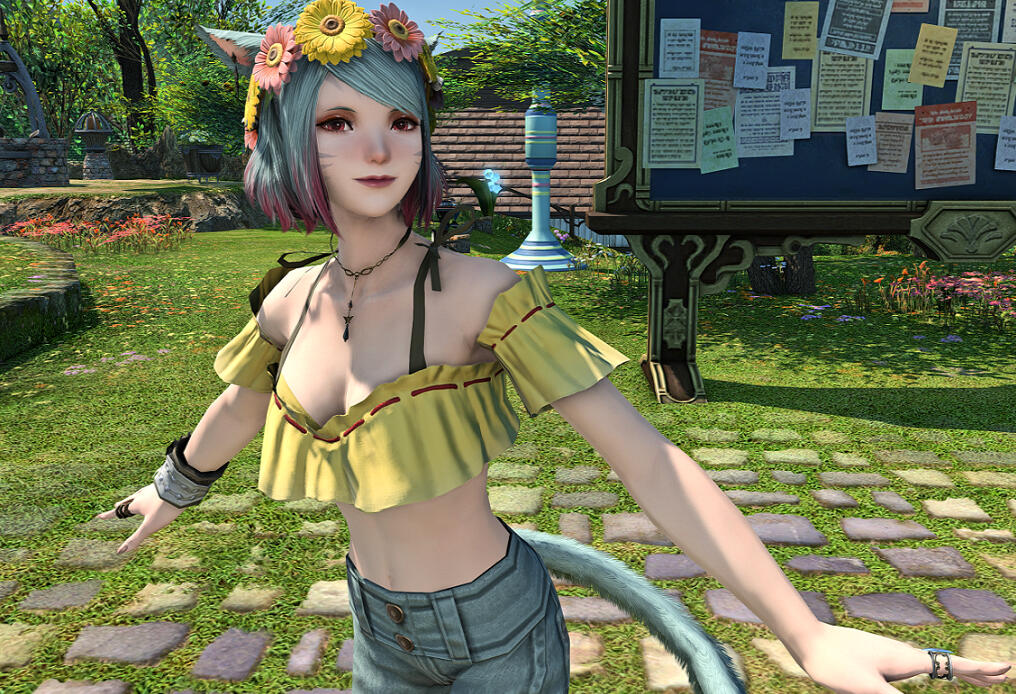 A Mysterious Ailment: Following a venture into the Amdaporian ruins that left her and a companion lost for three days, Framboise has returned to work with peculiar symptoms that are interfering with her ability to heal: lapses of memory, impotent healing spells, irritability, and most recently, violent coughing. Resident aetheric specialists have identified what appears to be residual white magic aether lingering with her own, most likely from her accidental stay in Amdapor--but it should've dissipated by now. What manner of corrupted magics has latched onto the conjurer, and to what ends will Fram go to restore the only skill she feels brings her any merit?

Curses of a Bygone Era: Framboise has taken a new-found interest in past legends of elemental intervention under the name of 'Greenwrath.' She's eager to learn of any recent occurrences, if such a thing exists - but moreover, she wants to unearth details of Gridanian purification rituals, for much of the information once hosted in the Conjurer's guild was lost to the Calamity...

The Abandoned Estate: Tucked away in Old Gridania on the fringes of the Black Shroud's centre lies a vast mansion. Deserted, but not empty, its innards are host to many a mystery. Framboise has purchased the mansion as it fell into foreclosure under the Adders' jurisdiction, but they are tight-lipped about any information pertaining to the previous owner or any of its occupants.

Mentor/Teacher Figure: Framboise got a late start to her aetheric studies, and as such she still has a lot to learn.

Protegé/Apprentice: Reversely, Framboise isn't without skill and knowledge to bestow upon a fledgling adventurer, what's more - she has a deeply-engrained nurturing side that she often has to keep at bay. If you're a baby alchemist or aspiring conjurer, she may be persuaded to take you under her wing.

Investments: Framboise has her hands in many pies, and her fortune continues to grow by way of sound and prudent investments. If you have a pet project for the betterment of Eorzea that needs funding, you have her ear -- in exchange for priority access, of course.

Foil: Framboise is fairly set in her habits and is pretty straight-laced.

Clients: In need a pocket healer? Or maybe someone who can whip up any herbal concoction you need? 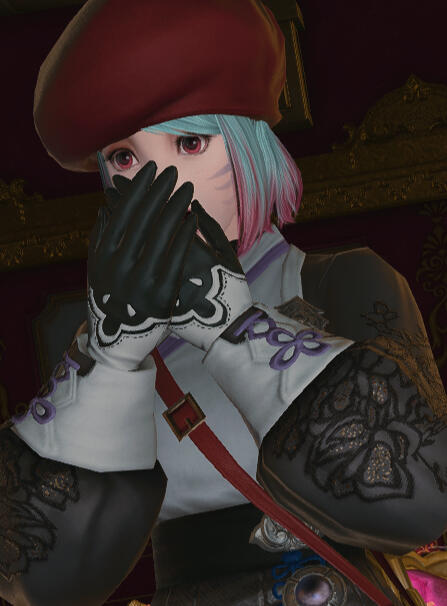 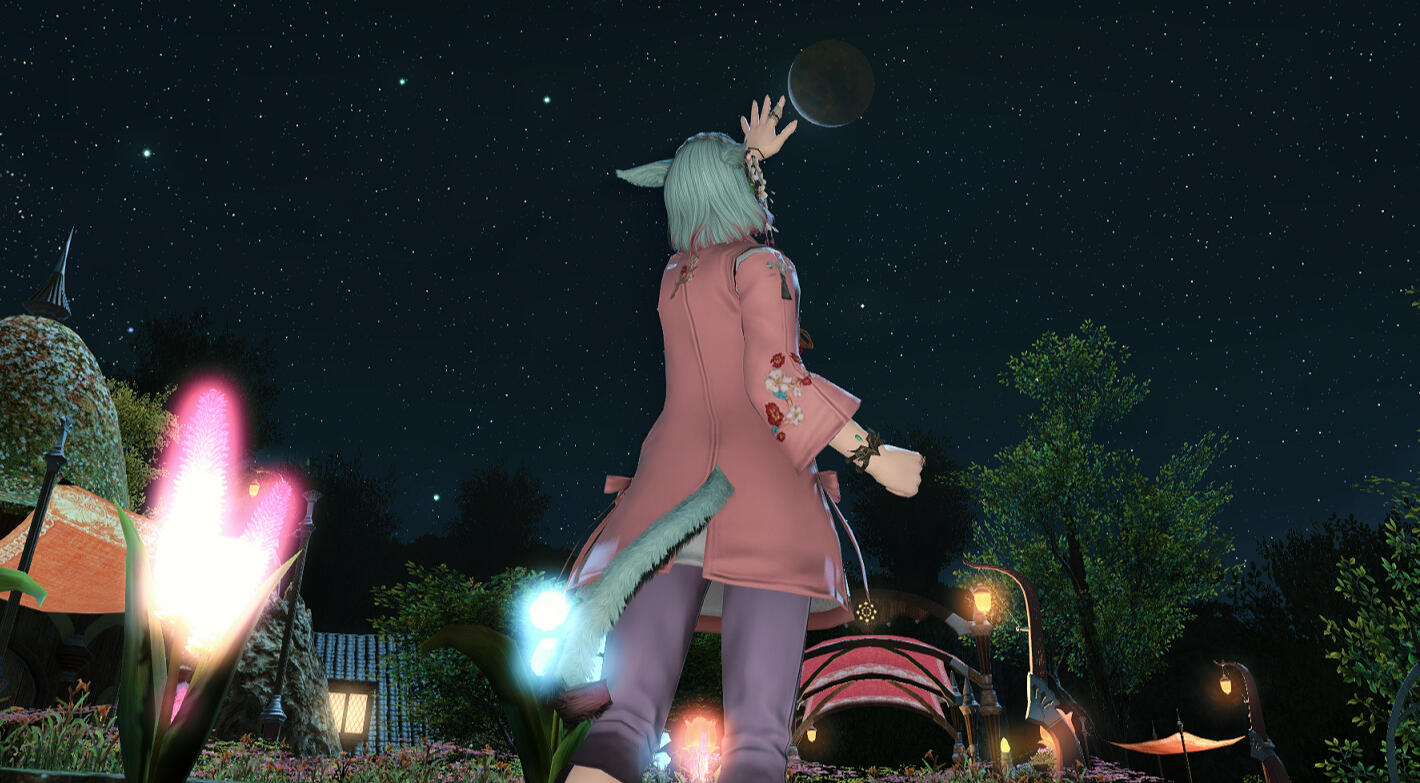 Citron Jhakroh - Clan elder, "Uncle." Her relationship with Citron is a complicated one that has followed her through her interactions with those around her. Although Fram's feelings towards her clan tend to lean towards avoidance and fear, she feels nothing but love for her Uncle, though due to distance and history, it's become more like wistful, one-sided pining.

"during those beautifully beautiful days, I was in pain -- I hated myself for not being able to receive love"

Galen Aubrey (deceased) - The closest thing Framboise has ever had to a fully-realized romantic relationship. They met in Gridania during a conclave of Free Company leaders, and though the thaumaturge caught the attention of several of her Driftwood Coast colleagues, she didn't pay him much mind. It was his inquisitive manner and eccentric mind that gradually drew her in, and his decisiveness and groundedness that eventually led to their whirlwind affair. They spent a couple of years bettering each other - exploring ancient ruins for him and unearthing magic secrets for her - until eventually disaster struck and Galen ended up a casualty in one of his mad experiments gone wrong. Framboise came home to their cottage in Mist to find little more than scorched earth where their happy home once was.

Kalen Cook - a fellow clanless, Kalen was Fram's best friend and eventual crush. However, her insecurity and his affinity to get into precarious situations with other women kept their relationship from ever gaining traction. I few years ago an invitation was addressed to Framboise to attend his wedding, but it was never opened.

Fitzwilliam Braddock - a Garlean refugee disowned by his father. One of Fram's first friends upon leaving the Jhakroh clan. He was a gentleman and disarming, if fairly awkward and prone to running his mouth. He started teaching Framboise Garlean early in their friendship, a skill she's continue to practice in secret to this day. He was the first of her friends to inexplicably vanish - she fears either his family summoned him home for a reckoning, or her family silenced him after she foolishly divulged their secrets. She isn't certain which is worse - but due to his disappearance, she's vowed to keep any future friends blissfully ignorant of her heritage.

Arry Dresdyn - Black Mage, leader of the now-defunct Free Company "Driftwood Coast." Estranged love interest. Growing close when co-leading the Drifters, Arry began growing aggressive in his pursuit of Framboise's affections, leading to voidal possession and eventual destruction of any relationship. Fram and several others dedicated every waking moment to recovering their leader, only for him to flee Eorzea once returning to his previous self.

Felix Bendixen - A Keeper orphan, adopted with his younger sister Paula by an exiled Garlean swindler. Felix and Fram entertained a brief yet earnest romance, fraught with struggles linked to the Bendixen father's deep debt to loan sharks. Unbeknowst to them both, he owed this debt to the Jhakroh clan, who eventually came to collect at the Bendixen household. Unable to cope with the traumatic experience of having Felix's legs shattered and her face cut, Framboise fled, going into hiding without a trace for two years...in hopes that without her exacerbating their ire, the Jhakroh clan would grant him leniency.

I'zimzizi Yarhuh - Red Mage, former mentor to Framboise and leader of the now-defunct Free Company the Vagrant's Vow. Zi was the mother/sister that Framboise never had. Zi fiercely protected her, and bestowed upon her her master's Red Mage Soul Stone. Framboise fled prior to completing her training, though she still keeps the Soul Stone well-protected and hidden. She's yet to brandish a rapier since.

Shigure and Rin Miyama - Two Raen siblings, refugees from Doma who were smuggled into Gridania courtesy of none other than the Jhakroh clan. Framboise intervened when the younger sister, Rin, was being used as a pawn to extort more money out of the elder brother, Shigure. She maintained a short but intense friendship with the siblings until they eventually drifted apart.

This Player Supports and Advocates for Gender and Sexual Minority Rights